The Best of Puglia (and Basilicata)

If you're thinking about traveling to Italy, but would like to avoid big crowds, I would suggest visiting Puglia and Basilicata (the heel of Italy's boot). This region is amazingly beautiful and still fairly undiscovered by mass tourism--  I think due, in part, to the need for a car. Other areas like Rome, Tuscany, Venice, and Milan can be visited using public transportation (or walking). Driving is much easier and more spread out in Puglia, so do not fear renting a car (even if you're heard horror stories about driving in Italy)! We spent 8 fabulous days in Puglia using Cisternino as our base-- these were our top 5 things to do in the area:

1. Take a boat ride in Polignano a Mare with Cliff Tours. You may have seen this beautiful city on Instagram and, believe me, it is just as beautiful in person as it is in photos. We took a similar tour along the Amalfi Coast last year, which was considerably more expensive and more crowded (the sea).  My husband prefers being on a boat rather than being on a crowded beach, so we booked a boat tour. The coastline along Polignano a Mare was relaxing and beautiful -- our captain, Francesco, showed us where the cliff diving contest happens every year (eek! It was super high) and also showed us the island that a man lived all alone on for 10 years after WWII. Going into the caves is always a fun -- this one, in particular, was super gorgeous, so we stopped for awhile for some photos. When we were out in the open sea, Francesco let the kids drive the boat for awhile and they were so excited. The 2 hour trip includes a stop for swimming and complimentary prosecco. You can rent the entire boat for more privacy (200 Euro) or pay per person (25 Euro/Adult and 20 Euro/Kid over the age of 6).

2. Discover Matera in an ape calessino. I have always wanted to ride in an ape calessino and my dreams came true on this Matera tour we booked through Musement. We planned to go to this UNESCO World Heritage site last year, but it didn't work out schedule-wise, so I was excited that we'd be spending time there on this trip. You may recognize this very unique city from movies like The Passion of the Christ, Ben Hur, or Wonder Woman. Matera is the only place in the world where people can say they've lived in the same house that their ancestors did 9000 years ago! The Sassi (cave networks) have existed since 7000 B.C. Exploring Matera in an ape calessino was absolutely perfect because it can get very hot there in the summer and I honestly may have passed out if we had walked to see everything (it was our hottest day in Puglia/Basilicata-  92 degrees + humidity). Matera was named Europe's 2019 City of Culture and there was a Dalí exhibit while we were there, which was awesome because we have been studying Dalí this year and will be visiting his museum in Figueres later this summer. The 45 minute tour stopped at several picture perfect spots and we had the opportunity to visit many of the breathtaking churches as well (34 Euro/adult, 6 euro/child) If you love cheese like we do, definitely pay a visit to Latteria Nicola. Grazia and Nicola are just the nicest people and we wish we could have spent all day with them (I'm not just saying this because they kept feeding us the yummiest cheese we've ever had). Every morning, milk is delivered to their shop at 5am (from the local farm less than 2km away). They curd the milk- a process which takes 4.5 hours, but is one of the reasons their cheeses taste so much better-- accelerators, chemicals, and additives are not needed and the cheeses are all-natural. The kids loved watching Nicola make mozzarella and burrata-- and I loved eating it (so did they). He also showed the kids how he makes butter and then we enjoyed it on top of fresh bread. Nicola learned to make cheese when he was 16-- his father was a cheesemaker and his grandmother was a cheesemaker. He clearly takes pride in this family business and has been making cheese for 46 years!  Not only was it a learning experience for my kids to see how cheese is made, but also for them to witness people putting so much love into their work. 4. Take a cooking class in a trullo. We love learning to cook local cuisine when we're traveling, so we booked a cooking class through Musement.  Anna, our chef, opened her home and welcomed us like family. She made everything look so easy and was very helpful, especially with the kids. I honestly thought the kids would give up after making the pasta dough, but they were having so much fun, they cooked with us all the way through dessert (with the occasional breaks to chase lizards and snack on fruit). We made pasta, tomato sauce, polpette (oh my goodness...so good), focaccia, pizzette, biscotti, and a fruit tarte. After cooking, we sat down and enjoyed the wonderful meal together sharing laughter and life stories. We left feeling like we'd made a friend for life-- Anna is truly fantastic! You can't go to Puglia without paying a visit to Alberobello-- another UNESCO World Heritage site. It's a town full of hundreds of trulli- white, cone roofed houses and shops-- and is truly a site to see (pun intended). We had initially considered staying in a trullo in Alberobello but, after researching how crowded it gets and how touristic the food can be, we opted to stay in Cisternino (also in a trullo and for much cheaper surrounded by amazing food). I would suggest visiting early in the day before the tour buses come, especially if you want to try and get some good photos. We arrived around 9am, walked around, watched an older woman make orecchiette, ate gelato and then were on our way-- we spent a total of 2 hours in this super unique city that is definitely worth a visit.

One thing I love about Puglia is that you can mix your days between city, beach, and country living. Next time we come to Puglia, we will stay further south so that we can visit Salento and its beautiful beaches. We did go to a few beaches that were awesome for kids (soft sand and still, clear water), but I'll save those for another post. We can't wait to come back and explore more of this region next time! If you need help with sizing, please email our Let customers speak for us

Lovely suit, the coverage of the rear and bikini area is great! I'm 5'9" with a longer torso and had plenty of room to shorten the straps and keep the girls well covered. I bought the suit in my typical suit size (for the longer torso) and probably could have sized down to more of my regular clothing size. There is a little extra fabric through the midsection. All that said it still fits great!

I have lived in Hawaii for almost 12 years and have purchased many swimsuits throughout the years. Some I returned and the rest have sat in my closet or I donated. (I’ve had six babies and let’s just say that I felt majorly uncomfortable in all the swimsuits I had purchased previously.)
About six years ago, I heard about Jessica Rey swimsuits. Still I just wasn’t sure I would be comfortable in these swimsuits either. (I had purchased other supposedly ‘full coverage’ swimsuits and well to put it simply, they weren’t full coverage.)
Finally, after the last swimsuit sale I decided to take the plunge. I bought the Eliza swim dress and the Jacquelin. And I’m so glad I did!
First off the quality of the fabric, WOW, it is unlike any of the many swimsuits I had tried before. Secondly, the cut provided great coverage but isn’t frumpy at all. (Actually it’s truly flattering.) Thirdly, these swimsuits are super cute (and the Paprika color was even better than in the photo).
The only cons I do wish the bottoms were separate from the top on both of these since my lower half is smaller than my upper half. So I put some of my sewing skills to use and altered them and they fit great now.
Thank you for providing a sustainable, quality, and simply put beautiful product!
Looking forward to owning more of these swimsuits in the future.

I delaying purchasing this swimsuit for over a year because I wasn't sold on the "paprika" (orange is my least favorite color) and the "ebony" was sold out. Finally, I decided to just go for it, with the assurance that I could return if needed. The "paprika" is surprisingly lovely. It is not nearly so orange as the website photos show. It has a more deep red to it...like the color of paprika! I am almost 5'5 and about 115lbs with a 30B chest. I ordered both an XS and a S. Really, both could have worked, but I preferred the more snug fit of the XS. LOVE the extra coverage over the bum. Also, no waxing necessary if that's not your thing. Feels more like clothing and less like lingerie. The shoulder buttons are nice for nursing moms, but you could also just slip a strap over your shoulder. This is my second suit from Jessica Ray. Hooray for quality, ethical, modest swimwear! Keep up the good work! 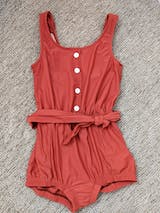 My sister was so please to receive a Jessica Rey Swim Suit & Clothing gift card. Thank you Jessica Rey for selling classy and elegant swim suits + clothing for ladies.

These earrings are very pretty, and seem to be well made. I'm looking forward to gifting them to someone very special to me.